THE PRESALE IS NOW CLOSED. SEE YOU AT THE SHOW!

A ticket to each of the two shows (see videos and other previews of these bands below):

…PLUS a limited-edition (only sold via this presale) DVD containing the MJEML short film “A Brief History of Flight,” our yet-to-be-made 48 Hour Film Project film, and the dolphin-battling music video for “Amylee,” plus other bonus video goodies.
…PLUS a CD copy (and/or download) of our new EP, Faith in Free
…PLUS a digital download of the film-soundtrack single, “The Violinist”

All for $20! [We are also offering tickets to either individual show plus Faith in Free and “The Violinist” (DVD not included) for $10.]

Note: you’ll be on an entry list at the door at TT’s (no physical tickets) 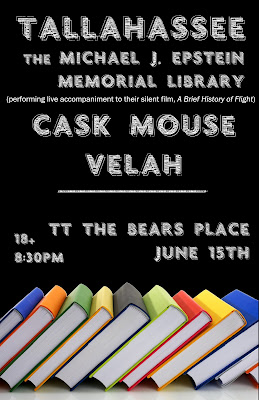 A Brief History of Flight – public film premiere!
We held an experimental private performance in which we played partial live musical accompaniment to a short, silent film that we shot over the course of two days. Now, the grand public premiere of the final cut with full-band performance! It is also our only scheduled live performance of the work.