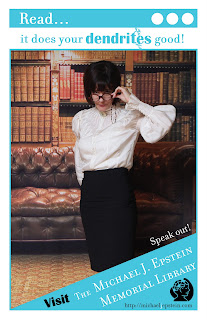 It is with great sadness that I announce the departure of Holly Collins from The Michael J. Epstein Memorial Library. Holly has been an integral member of the band since the beginning, inspiring one of the most popular audience questions – “what is that thing that Holly is playing?!?!?” In press, it has been called a sound effects box, a music box, and a texting machine, and various other made up things, but it’s actually a kalimba!

The unique sound of the instrument contributed everything from the sound of rain to creepy sustains, from echoing, delayed layering to lead melodic dances. It has been a big part of our sound.
Holly also helped shape the image of the band in the early days, serving as the band stylist. There were always deliveries of new accessories and hot tips for good deals on librarianesque clothing! We would never have come around to looking as attractive as we do without Holly’s help!

Although she won’t be playing with us any longer, Holly has promised us that she will keep on plucking the kalimbas, so keep your eyes and ears open! We also very much look forward to her continuing food blogging, particularly covering some exciting dishes she comes across in her travels. She writes about her award-winning food adventures and more at Nomsense.