Sophia Cacciola & Michael J. Epstein
Home » Music » MJE Memorial Lib » MJEML is house band for The Encyclopedia Show! 11/19/2012 – THE VISUAL SPECTRUM OF COLORS
50 Most Recent | Michael | MJE Memorial Lib | Music
We might just be presenting the debut of a song about what happens when the worlds of a sad mime and a happy clown intersect. 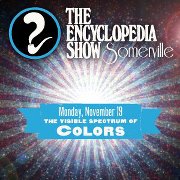 Presenting the third event in the brand-new Encyclopedia Show: Somerville! Our theme for the show will be THE VISUAL SPECTRUM OF COLORS.

The Encyclopedia Show Somerville is an event franchised from the original series founded in Chicago in 2008, wherein invited artists from a variety of performance disciplines present all-new, original works on sub-topics of a single theme. A recurring cast of hosts and characters welcomes the artists with open arms and minds, while the resident Fact Checker is charged wit
h maintaining the integrity of the Encyclopedic Truth of the show.

Our doors open at 7:00 for socialization in the theater bar.
The show itself will begin at 8:00 sharp.

This month’s show will feature brand-new work from the following artists:
* Marlon Carey, poet and hip-hop artist, extemporizes on the topic of FLUORESCENCE
* Ruby Rose Fox, local musical sensation, presents the truth about FILM COLORIZATION
* Sam Teitel, seminarian and poet, calls upon a special guest to illustrate the power of THE CRAYOLA BOX OF 64 CRAYONS
* Obehi Janice, theatre artist and star writer of Fufu and Oreos, improvisationally story-ates about FICTIONAL COLORS
* Ryan Lee Crosby, local musician, expands upon the idea of THE BLUES
* Daniel Gewertz, Mass Mouth storyteller extraordinare, explains COLORBLINDNESS
* Sam Cha, local multi-published poet, explores TETRACHROMACY
* And Mary Bichner, local musician, has agreed to be interviewed on the topic of her SYNESTHESIA, as well as present a musical piece about MA VIE EN ROSE!

In addition, house band Michael J. Epstein Mass Spectrometer will be presenting on ROY G BIV. Fact Checker Jack van Sly also welcomes his cousin Jenny to the stage, who will present on the topic of JADE.

Hosted by Aimee Rose Ranger and Kevin Spak, and featuring Omoizele Okoawo as food writer Chef Bro, Steve Subrizi as the Intern, and Jade Sylvan/Jack van Sly as our Fact Checker from the Institute of Human Knowledge and Hygiene. Musical support provided by the Michael J. Epstein Memorial Library.

This is an all ages show!
$10 admission / $7 for students, teachers, or guests in Prohibition-era dress.

Produced by Simone Beaubien and the Boston Poetry Slam. 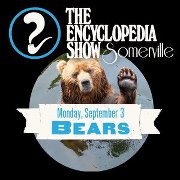 Our theme for the September show will be BEARS! Presenting performances from:
* Tony Brown — poetry on the subject of RUSSIA
* Krysten Hill — poetry regarding the nature of SLOTH BEARS
* Adam Stone with Claudia Wilson — poetry about BOO BOO BEAR
* Wes Hazard — comedy about THE BERENSTAIN BEARS
* Veronica Barron — dance/mime regarding SURVIVING A BEAR ATTACK
* Petaluma Vale — a harp solo with lyrics about URSA MINOR
* Cowboy Matt Hopewell — a rock ‘n’ roll perspective on the CHENGDU PANDA BASE
* Chef Bro — an educational treatise on the history of BEAR CLAWS

Our house band, The Michael J. Epstein Memorial LiBEARy, will provide musical flourishes and support, as well as compose an original work about DROP BEARS.

** EXCITING NEWS! ** Our Intern, Steve Subrizi, has confirmed that he will be bringing a LIVE BEAR to the show!

Hosted by Kevin Spak and Aimee Rose Ranger, and featuring Omoizele Okoawo as food writer Chef Bro, Steve Subrizi as the Intern, and Jade Sylvan/Jack van Sly as our Fact Checker from the Institute of Human Knowledge and Hygiene.
Come celebrate the launch of this new series! Produced by Simone Beaubien and the Boston Poetry Slam.