Download the MP3 – Subscribe on iTunes / Google Play
Listen at: Blood of the Tribades – Without Your Head

Sophia Cacciola and Michael Epstein joined us to talk about their new film Blood of the Tribades! 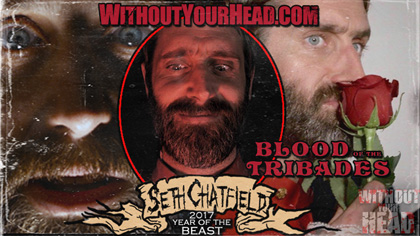 Sophia and Michael went over:
– origins of the idea
– 70s lesbian vampire films
– Hammer Horror
– making the movie
– costumes
– the score
– learning to make a movie
– the upcoming BluRay
– patriarchy
– sexism
– penises so much more!

Seth Chatfield “Grando” the lead villain of the film also joined us during the interview!

Call into the HEADLESS HOTLINE 1 (508) 413-3144 or Skype WithoutYourHead to talk to the guests or WYH Crew yourself for a chance to win FREE “Phantasm” and “Phantasm RaVager” DVDs!

And here’s a little something we made for Without Your Head!