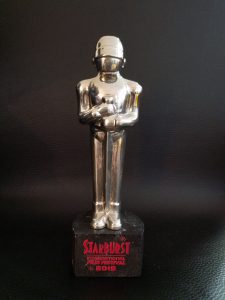 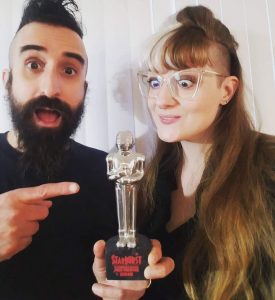 We're absolutely honored and blown away that we won Best Feature for Clickbait at the Starburst Magazine Starburst International Film Festival awards!

This past weekend saw the 2019 edition of the STARBURST International Film Festival take place at MediaCityUK, and boy was it a weekend to remember. In amongst the madness feature films and shorts played across three rooms over the Friday and Saturday, with genre icons Lloyd Kaufman (and his good wife The Commish, of course!)

We're excited for Clickbait to be an official selection at the Starburst International Film Festival! SIFF has been a great supporter of our previous films and we're thrilled to return!

To celebrate our Guest of Honour Lloyd Kaufman we’ll be showing the Troma classic The Toxic Avenger and his latest opus Return to Return to Nuke ‘em High aka Volume 2, which has something to offend everyone but does so in riotous fashion.

Other new films to be screened include the UK Premiere of the brilliant horror satire on popularity culture Clickbait, directed by Sophia Cacciola and Michael J. Epstein, and the English Premiere of Lawrie Brewster’s new cinematic nightmare Automata. We also have the UK Premiere of The Fare, a fabulous romantic time loop film from director D.C. Hamilton. Find out more about a controversial part of Chinese entertainment is examined in Category III: The Untold Story of Hong Kong Cinema, directed by Calum Waddell and featuring insights from many of the directors and actors from the scene.

There’s also a chance to see the brilliant Polterheist, directed by David Gilbank, a mix of comedy, gangsters, and ghosts that will bring the house down.

We're also delighted to be screening two short films from director Izzy Lee - My Monster and For a Good Time, Call...

We’ll be announcing more movies and the short film programme soon, so keep your eyes open!

The STARBURST International Film Festival takes place at Social 7 at The Landing at MediaCityUK, Salford, Manchester on March 15th and 16th.

Head over to www.starburstfilmfest.co.uk to find out more and book tickets now before they all go at https://www.skiddle.com/whats-on/Salford/The-Landing/STARBURST-International-Film-Festival/13411270/.