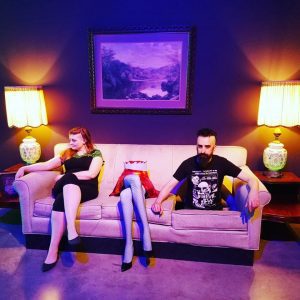 2019! Weird year. We drove our van cross-country to pick up the last of our possessions in Boston and then we took up permanent residence in Hollywood (moving out of Los Feliz).

Some of our favorite 2019 movies were: Parasite, Once Upon a a Time in Hollywood, In Fabric, Mope, Culture Shock, Tone Deaf, Hail Satan?, Memory: The Origin of Alien, and Dolemite is My Name.

2019 was a slower year for movie going than 2018. According to Michael's Letterboxd logs, we saw 412 movies this year at 585 hours of movie watching, but that does include some short films. In the end, we saw about a feature a day, and by quick count, 122 feature films in theaters (mostly repertory).

One of our goals was to not have my top directors list contain only white men (as it did last year). There's a little progress on that, but it could be better still.

Here's some movie theater experiences that stood out: Bong Joon-Ho Q&A at Egyptian w/Parasite, The Long Goodbye Q&A with Elliot Gould at the Egyptian, The Exorcist Q&A with Linda Blair, theatrical premiere of Mooch Goes to Hollywood, 11-film Dorothy Arzner retrospective at New Beverly, seeing Jaws/Hard Ticket to Hawaii double at Egyptian during our biggest earthquake yet, and so many more!

We also got to see some of our favorites in concert: Lana Del Rey at The Hollywood Bowl, Nick Cave Q&A at Disney Hall, Goblin performing Deep Red at The Palace Theatre, Chromatics at The Wiltern, and Better Oblivion Community Center at The Wiltern.

While we were in Boston, Sophia got to perform again with Catherine Capozzi's Bring Us Your Women at the Somerville Theater - look for a recording of a new song "Medusa" soon!

Will 2020 be the year we get a pet after 15ish years living together?

To close out the year, in December, we shot a top-secret feature film project that we can't wait to talk about more very soon! Until then, here's a teaser photo from set! 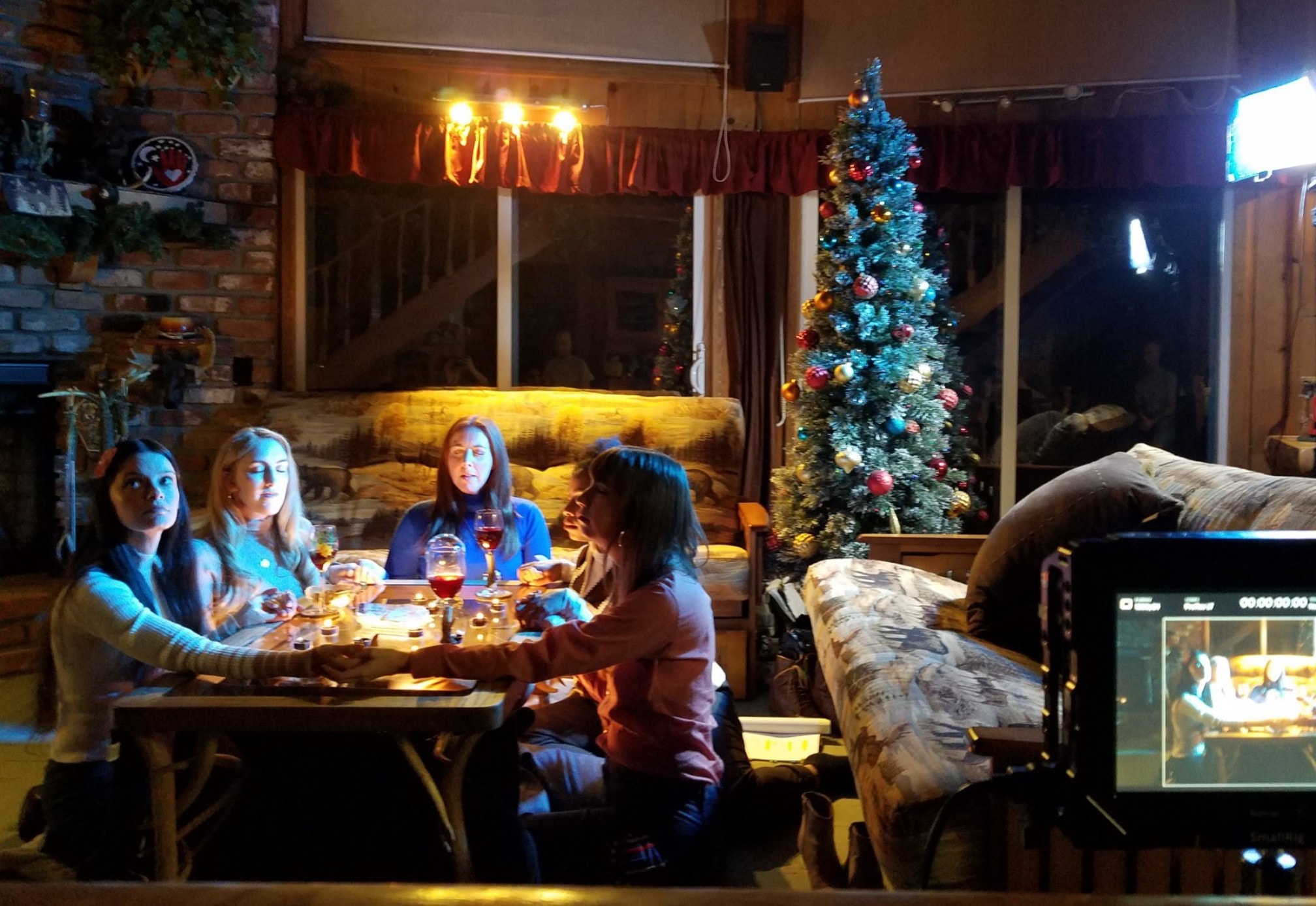 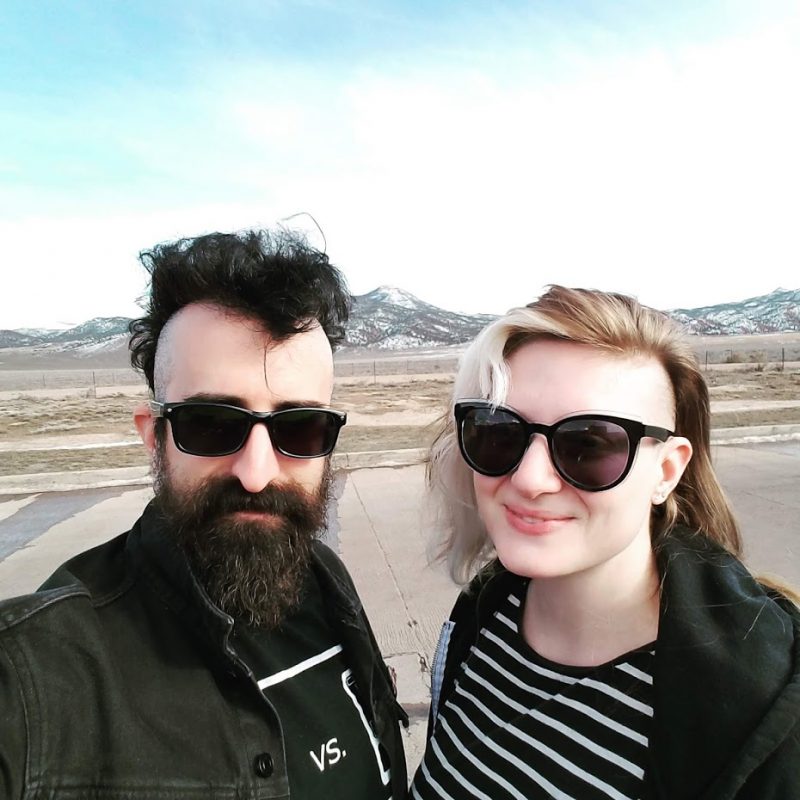 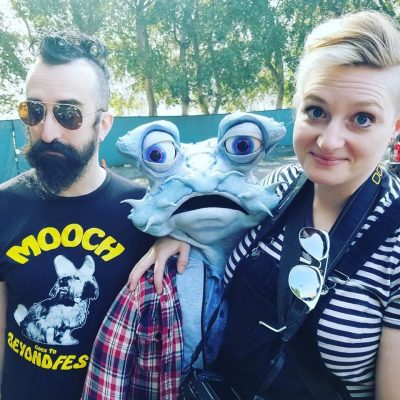 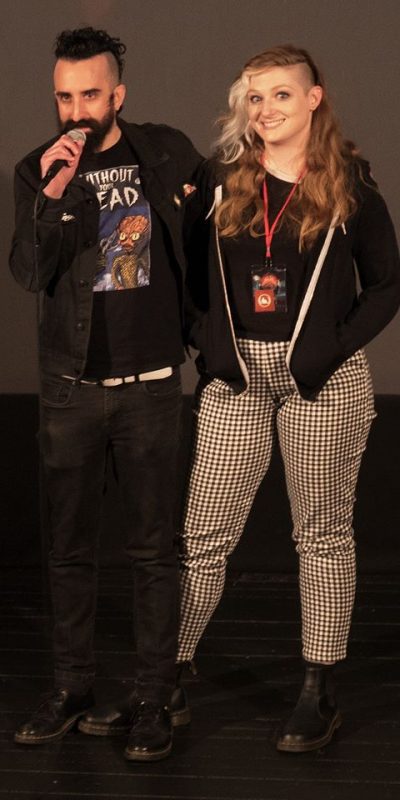 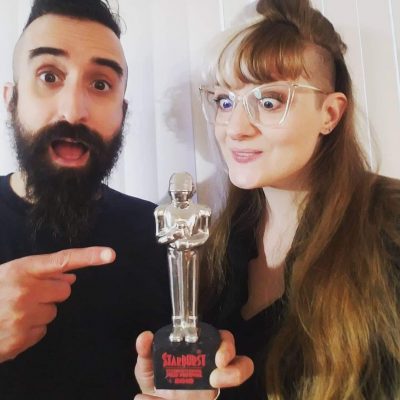 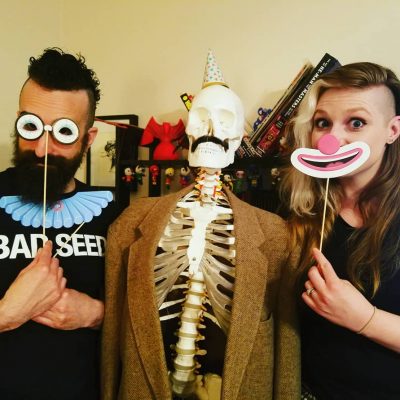 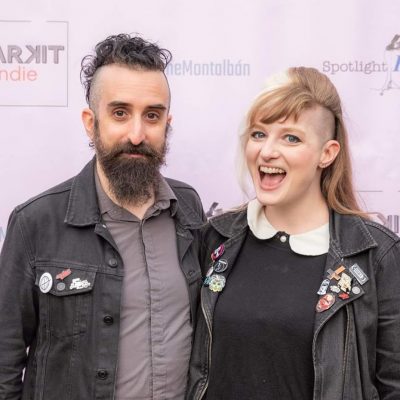 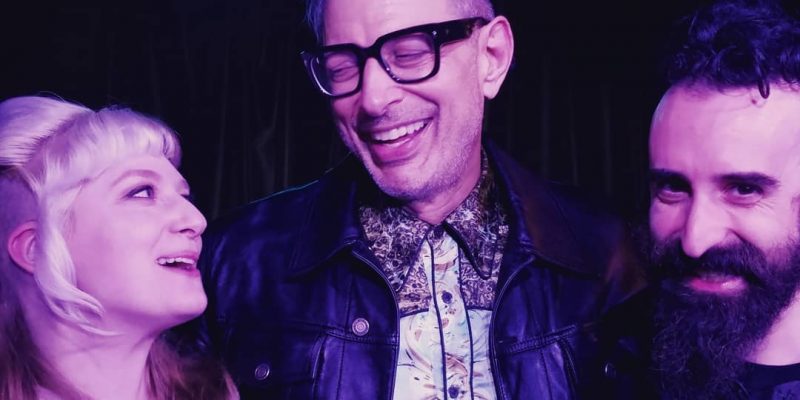 Clickbait was released via ITN  this year - watch it now on AmazonPrime!

We screened at a few more festivals this year: the Boston Underground Film Festival and Starburst International Film Festival (where we won BEST FEATURE!!), and Motor City Nightmares

We were interviewed by the Boston Globe while at Boston Underground

We released a music video for the credits sequence song, Broken Heart

The soundtrack was released by Plaza Mayor Records 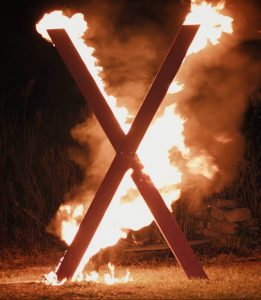 Although it's older at this point, we also have also seen a continuing recognition of Blood of the Tribades with new reviews (and another):

Some of our favorite quotes:

"Blood of the Tribades might be a love letter to the lesbian vampire films that came before it, but it is also a much-needed update to the familiar formula. It is packed beginning to end with commentary on the misogyny women face in modern society, from religious corruption as justification for oppression, to the daily threats being made to our rights, to racial divides amongst ourselves. And it does it all while at once celebrating and subverting a subgenre that has both appalled and appealed to women for decades."

and in a retrospective on the Legacy of the Lesbian Vampire:
"This film reflects current, progressive ideas about feminism more directly than any of the Carmilla adaptations. It’s very much an homage to the lesbian vampire films of the 1970s; attention is paid to every detail to give the film the look and feel of these films, but the story deliberately subverts their traditional tropes and gives women control of their own narratives. It takes everything that makes films like The Vampire Lovers so appealing and makes them empowering, rather than depowering, for their queer and female audience. It’s stories like this, and the Carmilla web series, that are finally giving the lesbian vampire the narratives she deserves...BLOOD OF THE TRIBADES IS A TESTAMENT TO WHAT ANDREA WEISS CALLED “REAPPROPRIATING” THE LESBIAN VAMPIRE’S POWER."

The above review and inclusion in the retrospective mean a lot to us because we created a niche film intended as commentary and recontextualization of a very specific genre / period of film. It makes us very happy to see the film reaching more people with interest in this context.

We continued to work with the Women of Rock Oral History Project as videographers/sound/editors in capturing the life stories of amazing women who have been underrepresented in the media and thus history.

This year we helped out on shoots with Freyda Payne and Toody Cole as well as a few others that have yet to be released.

2020 goal is to finish cutting this into a documentary!

SHORT FILMS (we wrote and directed)

We created this mini-doc about Neal Jones losing his belly button. It has played about a dozen fests (with more to come) and won several awards!

The Dial Tone of Doom, our segment for Tales from the Grave played several fests and won a best score award at GenreBlast.

Our film, Pride, from the forthcoming 7 Sins anthology, premiered to a midnight avant-horror crowd at Film Maudit 2.0.

Pryomania, our film from the I am an Addict anthology, premiered along with the rest of the anthology at the Pastel Wasteland festival.

We worked on a bunch of fun projects for others this year!

-In January we spent the whole month working on a feature (Sophia as 1st AC and Michael as a grip) called The Stalking Fields - we froze and we made some great friends, excited to see it when it's completed.

-Glossary of Broken Dreams: we helped shoot some sequences while we were in Austria two years ago is now available to watch!

-Shot by Sophia and Michael in December 2017, Izzy Lee's Re-Home had a successful festival run this year (including Fantasia, Horrible Imaginings, GenreBlast, Nightmares, and more!). Michael was editor on Izzy's Obliteration of Chickens which also saw many festivals this year!

-We helped produce and Sophia was cinematographer on Seth Chatfield and Toni Nagy's Shiny Diamonds (coming to film festivals in 2020).

-We shot the pitch pilot for a space-alien-puppet traveling TV show from Michael Kallio and Ashleigh Nichols called, Travelin' Time.

-We worked with Director Dustin Ferguson shooting interviews for Direct to Video documentary about straight-to-video horror releases of the 1990s. 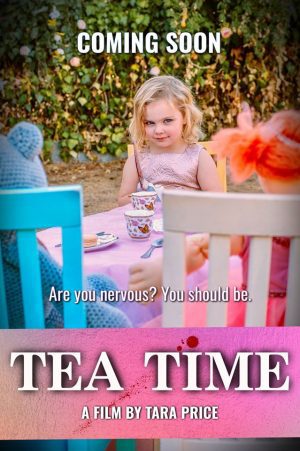 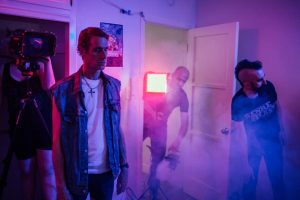 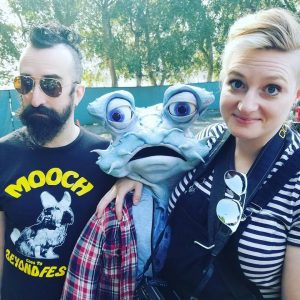 with our puppet child on Travelin’ Time 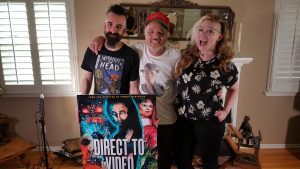 with Clint Howard for Direct to Video 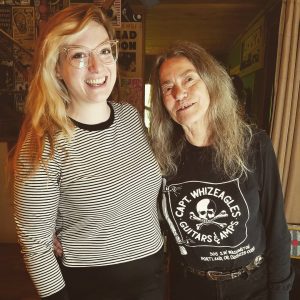 with Toody Cole for Women in Rock Oral History Project 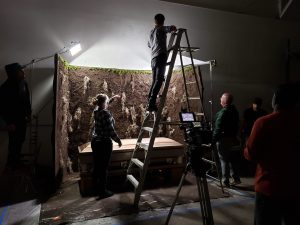 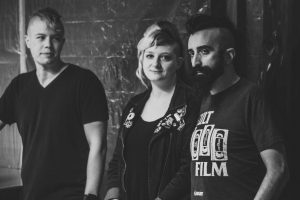 with Matt Stuertz on Stalking Fields 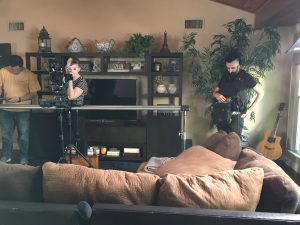 We had the pleasure of producing and Sophia was the director of photography on Aaron Barrocas's hilarious horror-comedy short, Half-Cocked!, starring Pat Healy, Vanessa Benavente, Lundon Boyd

The latest screening news is up to date on our Half-Cocked post, but at the moment:
Upcoming screenings: 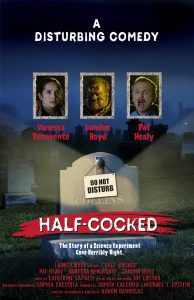 Director/Editor Michael Gill brought us on to shoot the new Jimmy Eat World music video for '555':

Music video for "Broken Heart" from the Clickbait soundtrack!

We shot a music video for City Bros!

Michael shot this video for GreatDaeg:

Music video shot on our old rooftop for Dirty D:

Indie Infestation (interviewed us at Genreblast)

Boston Globe about Clickbait, Boston Underground and moving to LA

B&H Show Us Your Shot Interview

Past Years in Review