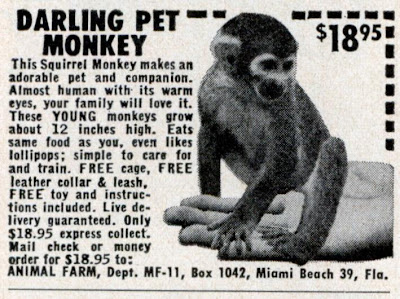 Sure, I said we’d roll out one song a month, but in order to finish by the end of the year, we had to get a little bit ahead. So, as we had already presented a demo of this song a while back and have included this rerecording on the Boston Band Crush Sampler #11, I figured we could sneak this one out now.

There are so many things wrong with this “item” that it’s hard to even know where to start. First of all, it was a monkey…sent through the mail! Monkeys are wonderful, beautiful creatures, but the idea that you can just send for one by mail and it’s going to be a friendly family pet is more than a little crazy.  As such, here’s our song about the “Darling Pet Monkey” for your enjoyment. (We weren’t the only ones inspired by this story.  There’s also a musical, Pepe: The Mail Order Monkey.) [Naturally, our band name comes from this monkey and the combination of Do Not Forsake Me Oh My Darling and Axemunkee.] 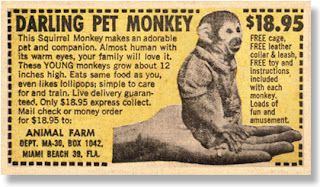 This Squirrel Monkey makes an adorable pet and companion. Almost human with its warm eyes, your family will love it. These YOUNG monkeys grow about 12 inches high. Eats same food as you. even likes lollipops; simple to care for and train. FREE cage, FREE leather collar & leash, FREE toy and instructions included. Live delivery guaranteed. Only $18.95 express collect. Mail check or money order for $18.95 to: ANIMAL FARM, Dept. MF-11, Box 1042, Miami Beach 39, Fla.
I don’t have a whole lot of commentary on that description (it speaks volumes for itself), but I will say that it’s might interesting that the monkey comes from a place called Animal Farm – very Orwellian. I did a little research to see if there was any chance that this company still exists and couldn’t find much. 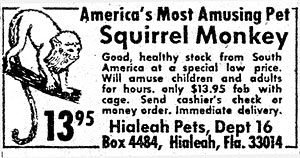 Let’s take a look at current laws regarding keeping primates as pets.  Sure, in Alabama, Arkansas, and Nevada (and some others), you can have all the monkeys you want without government intervention. Here in Massachusetts, they are now straight-up banned…and for good reason. I won’t pass along the horror stories of monkeys attacking people and ripping their faces off, but I will point you to this National Geographic article outlining why monkeys are bad choices for pets.  Among those reasons, they need a huge amount of attention or they get really depressed (in the same way that people do) and possibly aggressive.  There is a heartbreaking story on an episode of Radiolab about a chimp named Lucy. I should disclose that I believe that humans differ little biologically from other animals and it seems clear that our Darling Pet relatives have a lot in common with us (besides just liking lollipops). As such, it is inherently really awful to think about these little ones being shipped via mail to kids with no idea how to care for them.

I spent a good amount of time searching for stories about someone who actually ordered a DPM and only came up with one full story, which was popular across the web. Pop! reports the tale of Jeff Tuthill, who had secretly ordered the monkey (without parental permission) and, after sneaking the monkey into his basement, found it a little challenging to handle:

“No instructions [were included]. He had this waist belt on, a collar, if you will, on his waist, with an unattached leash inside the box. So I opened the box up inside the cage, the monkey jumped out, I withdrew the box and found the leash. I have no idea where it came from; I assumed it came from Florida. I figured, well, it’s probably near dehydration, so I opened up the cage to put some water in it. It leapt out of the cage when I opened it up the second time! I mean, it was eyeing the pipes that I was unaware of. As soon as I opened the cage, it leapt up and grabbed onto the plumbing up on the ceiling and started using them like monkey bars, and he was just shooting along in the basement, chirping pretty loud. It was heading towards the finished side of the basement, where there was a drop ceiling, and if it got into those channels, I never would have got it. It would have been days to get this thing out of there. I grabbed it by its tail, and it came down on, starting literally up by my shoulder, like a drill press it landed on my arm, and every bite was breaking flesh. It was literally like an unsewing machine. It was literally unsewing my arm coming down, and I was pouring blood. I grabbed it by its neck with both my wrists, threw it back in the cage. It’s screaming like a scalded cat. I’m pouring blood. My friend’s laughing uncontrollably, and my father finally comes in the basement door and goes, ‘Jeffery! What are you doing to that rabbit?’ And I go, ‘It’s not a rabbit, it’s a monkey, and it just bit the hell out of me.’ ‘A monkey? Bring it up here!’ I’m pouring, I wrapped a t-shirt around my arm to stave off the bleeding, carried the cage upstairs, and I don’t know why I bothered sneaking it in, because they fell in love with it, and it was like, there was no problem at all. They took me to the emergency room and I got 28 stitches on my arm.” The young comic reader learned the hard way to never grab a monkey by the tail.

After the initial challenge, his family actually managed to handle the animal and enjoy it for its short life of 5 years. Apparently, using monkeys as replacements for children is becoming a, uh, thing that people do according to a currently airing documentary called _My Monkey Baby_. I am afraid.

Here’s a video showing how quick these monkeys are! I can’t imagine trying to chase one down.

I got a monkey from the back of a catalog.
Monkey has a tiny hat and two tiny paws.
$18.95 delivered to your front door.
Can’t buy a monkey like that at any store.

Monkey loves dancing to the rock ‘n’ roll.
Monkey likes to groove ’cause he’s got a lot of soul.
Monkey do, monkey see.
Mom and dad ain’t takin’ monkey from me.