We had a total blast at Edrie’s (of Walter Sickert and the ARmy of BRoken TOys) birthday rock show with Rick Berlin and WS+tAoBT!!! (Preview I had written before.)

Others enjoyed it too: A review in the Scout

Some videos from Sophia’s Rock Beat and others:

The excitement didn’t end quite after the last note…Rachel Leah Blumenthal tells the after-party show story:

After the show, we were saying goodbyes outside when we saw a man in a red Adidas jumpsuit heading into the Greek-American Social Club next door. Joel wears nearly an identical jumpsuit when he performs with his band, the Somerville Symphony Orkestar, so he went totally crazy when he saw the man. “My inspiration!” he yelled excitedly. An attendee of the Radio show was standing nearby, quite intoxicated, and insisted that the Social Club was the place where they throw money in the air. Intrigued, a group of us drifted closer to the door until someone inside – perhaps the man in the jumpsuit – waved us in.


We were welcomed to a round table of older Greek men, most of whom didn’t seem to speak English (or maybe just preferred talking about us in Greek. I did hear a word that sounded like “American” a few times, followed by laughter.) Everyone was smoking. Alcohol and melon slices appeared on the table. Rums all around.


A band was playing: a singer, a drummer, and a bouzouki player. They seemed to be excited that their audience had doubled. The singer moved closer to us and amped up his stage presence. Some of the women in our group ended up on the dance floor with the older men…and then dollar bills were literally being thrown in the air.


At some point, the rest of the group snuck out – only Joel, our out-of-town friend Roxy, and me were still there. Roxy got stuck dancing with someone – and looking increasingly uncomfortable – until we finally got up and left. Roxy’s dance partner tried to get her number but to no avail. And Joel continued to obsess about the man in the jumpsuit for days. 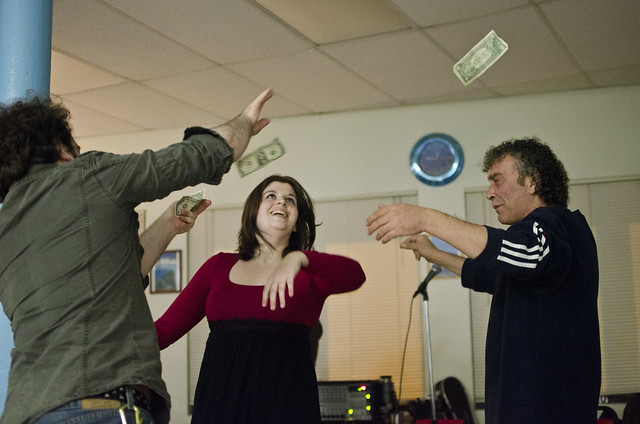