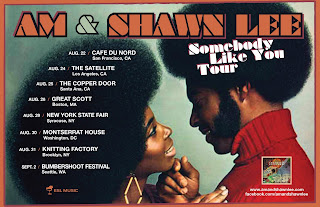 We’re very excited to be opening for AM & Shawn Lee at Great Scott on Tues. 8/28 (tix). The show is presented by Bowery Boston, and awesome music blog, Ryan’s Smashing Life. Facebook event

————————–
AM & Shawn Lee are finishing up a new album and you can be a part of the process, be the first to hear the tracks, and get involved. Check it out here:

AM & Shawn Lee documented their recording process in Los Angeles and London through photos, emails, and behind the scenes studio videos. Andy Votel, U.K. DJ and tastemaker mixologist of Finders Keepers/B-Music fame, provided the album’s cover design and liner notes. The album is now available worldwide.

Limited Edition merch at: http://www.amsounds.bandcamp.com/
Description
*If you don’t see your city here– get involved with bringing AM & Shawn Lee to your town email slam@visionworksmusic.com for more info

“Michael Epstein, the brains behind all this musical genius, integrates parts of his life to make music that moves from genre to genre without any borders.”” – Magnet

“I don’t know what sort of perverse musical mind comes up with the idea of forming a nine-piece pop orchestra made up of eight girls who’ve never been in bands before and one guy who looks bizarrely like a young Groucho Marx, but this is what it is!” – Steve Lamacq, BBC Radio 2

“If Weezer and The B-52’s got drunk and hooked up, their offspring would be The Bynars… Deliriously danceable rock doesn’t get any better.” — Lonely Vagabond

“The Bynars’ [debut album] is a sparkly, spiky, adrenalized dash through a Rentals-meets-Passion Pit electro-pop dream that buzzes with Weezer-y guitars, old school new wave synth squiggles, and perky songs about weighty topics like asking your mom for money.” — The Boston Globe

“Chair dancing to these songs is a certainty” — Music Savage