Jade reads Jewel in her Jockeys!!!
First and foremost, if we get to 100% funded by tonight at midnight, Jade Sylvan has agreed to read Jewel poems in “unflattering underwear” in Harvard Square. I don’t know quite what this means, but I am confident that it would make a lovely bonus feature on the TEN DVD, so let’s make it happen!!!

The Economics of TEN

One of the very strange things about fundraising is fighting the misconception that spent money vanishes into thin air and has no additional effect or benefit.

For example, after NASA’s Curiosity mission started bearing fruit, there were a lot of complaints that $2.5 billion was spent to make it happen. In particular, the idea that this money could be better used to help those in need within our national system was pervasive. It fails, in at least some sense, to identify that the $2.5 billion was actually “spent” because it paid the salaries of engineers, technicians, designers, physicists, contracted manufacturers, and others. I am guessing that most of these people reside in the U.S. and that very little of this money went toward outsourced labor outside the country. The question really is not whether money was “wasted” on this project (or on the jobs created), but perhaps rather, was this the best project that could be allocated those resources. Did it efficiently redistribute the money “spent” or did it pad wallets unnecessarily. (There is a lot of modern class-war anti-wealth rhetoric bouncing around and I won’t get into that, but wealth distribution within a project is certainly not unreasonable to consider.)

What does Curiosity have to do with TEN the movie? Well, a high percentage of the spending associated with TEN is going directly to labor costs for local actors, artists, techs, etc. This was sort of addressed in the original Kickstarter post, but I hoped to elaborate here. At this stage, we only have an estimated budget, but from my experience coordinating projects like this, I expect that the estimates are relatively good. 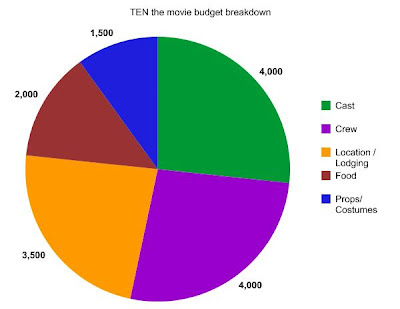 Despite the fact that I am asking for the money (i.e., my name is on the fundraising effort), none of the money goes to me. In fact, and we haven’t made an official commitment, but it’s looking like we’re going to match almost 50% of what we raise through Kickstarter with our own money. So, when you contribute to our campaign, none of it ultimately goes into my wallet and even moreso, if the film gets funded, the money will be supplemented from my wallet.

Including all of the Kickstarter money we are close to raising, we’re looking initially at approximately a $15,000 production budget (after Kickstarter fees of about $800). We couldn’t make this happen without Kickstarter and the film will absolutely only be made if it gets funded. Presuming that it does (we’re currently at 84% with 4 days remaining), the pie chart here shows associated budget distribution.

Approximately $8000 goes directly to paying the cast and crew for their time, dedication, and energy. I can promise that this pay will be barely minimum wage once the hours put in are considered (if even minimum wage). It is however, at least some money to allow these skilled actors and crew members to pay their rent during the time that is set aside and dedicated to shooting this movie. In order to successfully make this film, it will not be possible to shoot on random available weekends/evenings stretched out over a long period. Rather, we need to create a short term, intensive experience. This requires interruptions to the lives of the people involved with the film, which are not possible without some salary.

So, $8000 (more than half) goes to directly to creating jobs (that otherwise would not exist) and paying salaries for those jobs. Additionally, we’ve set aside $2000 to cover food costs for the time of the shoot. This is, in some effective sense, also salary for the cast/crew, now yielding 2/3rds of spending going directly toward paying the rent of, and feeding the cast/crew during the duration of the shoot. (Sophia and I are taking no salary from this, though I do imagine that we will be eating.)

For the money raised through Kickstarter, we will lose approximately 8% to Kickstarter and Amazon transaction fees.

In summary, approximately 90% of the money spent on the film is going to be reinvested locally – given to artists (none of whom are simply accumulating wealth – it will be spent on their living expenses and further redistributed) and used on food/location/wardrobe via local purchasing.

This post may seem unnecessarily didactic, but I feel like it’s important to justify fundraising for creative projects carefully. For example, I’ve extensively criticized the misuse of Kickstarter as merely a pre-sale mechanism for projects that are guaranteed to come to fruition regardless of funding.

We hope you will consider helping us make this happen and if we all hurry, Jade reading Jewel will be a bonus! Kickstarter project link: http://www.kickstarter.com/projects/michaeljepstein/ten-b-movie-psychological-thriller-full-of-twists