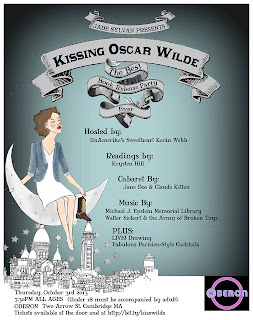 https://mjeml.michaeljepstein.com/ wrote a song about traveling to Paris to kiss Oscar Wilde? We’re debuting it on October 3rd at Oberon? But why?!?!?!?

Why go to a book release party in a basement, when you can attend one in a giddily drunk underground nightclub? What about a nightclub with the glamour of prewar Paris – or what you imagine glamour was like in prewar Paris?

(You can buy your copy of the book along with your ticket and save $2 off the cover price! Plus, Jade will sign it at the show!)

“Louis stayed clothed on the bank with the two body-shy college girls. He told me later it was because he had jock-itch, not because he was not fun-loving and star-gazing.” – Kissing Oscar Wilde, p. 18

THE DETAILS:
Thursday, October 3rd, 2013
7:30 PM all ages (under 18 must be accompanied by adult)
Oberon Two Arrow St. Cambridge