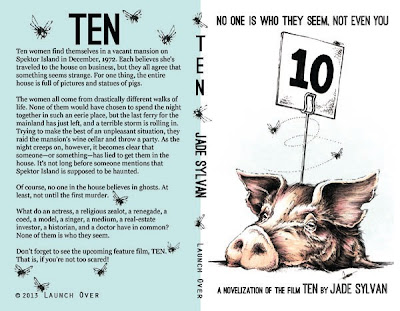 The TEN film companion novel tells the story of TEN from the perspectives of the ten characters. Each of the ten chapters presents the perspectives, perceptions, and back stories of one of the visitors to Spektor Island. The novel serves to expand the world of TEN and present thematic reinforcement that enhances the TEN experience.

Ten women find themselves in a vacant mansion on Spektor Island in December, 1972. Each believes she's traveled to the house on business, but they all agree that something seems strange. For one thing, the entire house is full of pictures and statues of pigs.
The women all come from drastically different walks of life. None of them would have chosen to spend the night together in such an eerie place, but the last ferry for the mainland has just left, and a terrible storm is rolling in. Trying to make the best of an unpleasant situation, they raid the mansion's wine cellar and throw a party. As the night creeps on, however, it becomes clear that someone--or something--has lied to get them in the house. It's not long before someone mentions that Spektor Island is supposed to be haunted.
Of course, no one in the house believes in ghosts. At least, not until the first murder.

What do an actress, a religious zealot, a renegade, a coed, a model, a singer, a medium, a real-estate investor, a historian, and a doctor have in common? None of them is who they seem.

Jade Sylvan is the author of the autobiographical novel, Kissing Oscar Wilde (2013), the poetry collection, The Spark Singer (2009), the fiction novel, Backstage at The Caribou (2008), as well as many other poems, stories, and essays, some of which have appeared in publications such as PANK, The Sun, BuzzFeed, Bayou, Basalt, Word Riot, and others. In 2012, Jade cowrote and acted in Sophia Cacciola and Michael J. Epstein's film, TEN. Jade is originally from the Midwest, but now lives in Cambridge, Massachusetts among a rotating cast of geniuses, fairies, magicians, and kings.