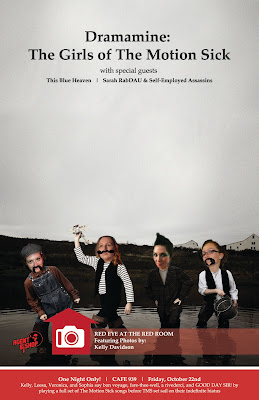 (I had originally posted about the event here.)

Last night, at Cafe 939, The Girls of The Motion Sick chanted, “they lucked out and scored us awesome chicks” in their lone original song (see song #6 in the playlist below), an eponymous number giving a sort of explanation of the project and dedicating a set of verses in which each of us fellows in The Motion Sick got a bit of a roasting.

Indeed we did luck out as our female counterparts of sorts gave us a very kind sendoff by learning and performing a set of our songs. They even roped the other acts on the bill, an evening organized and promoted by Agent Mike Bishop, into doing a song each and got several notable special guests in on the performance. It was really very flattering that they took the immense quantity of time and energy to let us have fun with our songs one more time before we are off on an indefinite break. The evening was also the photo opening of a photo exhibit by Kelly Davidson, rock photographer to the stars and official tour photographer for Do Not Forsake Me Oh My Darling.

Here is a full video recording of their awesome set, which also included guest appearances by Jen Johnson (Static of the Gods), Tad Mckitterick and Kate Murdoch (Sidewalk Driver), and J-Krafty (the original crafta) as well as a giant all-in dance-and-sing-a-long version of “30 Lives” to close the night out:
Sarah RabDAU and Self-Employed Assassins took “Grace Kelly” full circle, allowing its lyrical depiction of its main character’s circus life to shape the form and arrangement of the song.  It was shiver inducingly great!  Here’s some video of that performance and a couple of their original songs:
This Blue Heaven took what I can perhaps best describe as a Latin music approach to “Losing Altitude” – my complete lack of taxonomic knowledge of the category leads me to sort of guessing to call it kind of a Bossa Nova approach.  It was really excellent to hear the song transformed and owned by TBH and really great to hear it go down a path we never would have (or could have) taken on our own.  Here’s video of that performance a couple of originals from TBH.

The show garnered press writeups in the Metro (scan below), The Weekly Dig, Boston Band Crush, and Cheap Thrills. 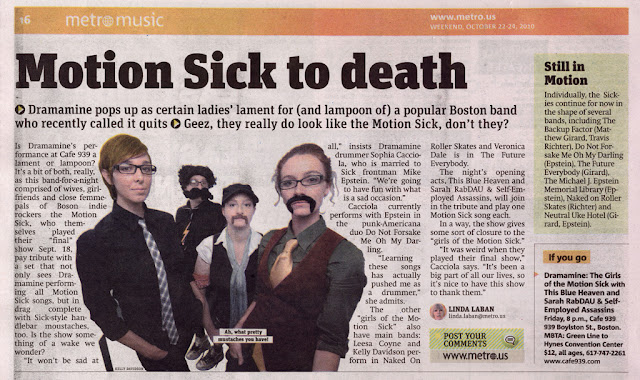