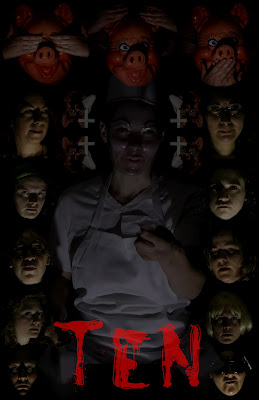 We are currently raising money via Kickstarter to make this into a feature film: http://www.kickstarter.com/projects/michaeljepstein/ten-b-movie-psychological-thriller-full-of-twists

Now, its here for you…

As we’ve been having a lot of fun lately making movies, we decided to enter the Brattle Theatre Trailer Smackdown competition this year.

In some ways, this is similar to the parameters of the 48 Hour Film Project that we recently completed. We had far more time to work on this trailer, but we (and all other groups) were assigned the title TEN in celebration of the 10th year of this competition.

We then had an opportunity to choose one element from a list in several categories. Our film is a thriller, has a ghost hunter character, is set in a castle, and includes a slap.

Sophia and I collaborated with Sarah Wait Zaranek on the treatment and script. Our story (set in the 1970s), explores a creepy psychological association with children’s nursery rhymes, particularly centered around pigs. There are a lot of complex ideas associated with the imagery that couldn’t really be thoroughly examined in a 2-minute trailer, but the premise is that ten individuals (all women) find themselves stranded on an island. They are killed off by a mysterious murderer, The Butcher, soon realizing that the killer is actually someone among them.

There are countless other ideas that would have been explored in a full piece including irrational, unusual behavior as a result of survival paranoia, the many things associated with both pigs (animals, greedy, filthy, overeating, chauvinism) and women as pigs (meat market, etc.). It’s kind of a heavy discussion and a bit volatile, and unfortunately, most of it is pure subtext in our 2-minute trailer.

Many more photos below the cut…