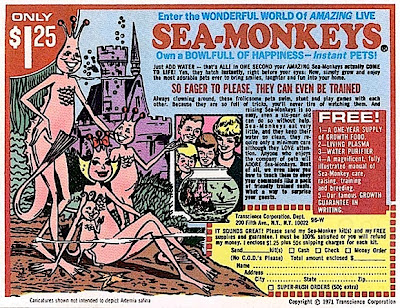 Sea-monkeys (official site) are perhaps the quintessential item famed for being sold in comic books. As soon as Darling Pet Munkee saw the light of day, I knew that we had to write a song about the Wonderful World of Amazing Live Sea-Monkeys!

We already discussed Harold von Braunhut over on the post about X-Ray Specs (see the specs page for more stories of his connections with the Aryan Nation, a white-power group), another invention of his. Harold “invented” Sea-Monkeys in 1957 and started selling them under their current moniker by 1960.

We decided to examine a scenario in which our misnomered simian friends attempt a world-wide takeover. I present to you, Darling Pet Munkee’s “Sea-Monkeys”

According to Wikipedia, the secret “monkeys” come into being as follows:  The colony is started by adding the contents of a packet labelled “Water Purifier” to a tank of water. This packet contains salt and some brine shrimp eggs.[3] After 24 hours, this is augmented with the contents of a packet labelled “Instant Life Eggs”, containing eggs, yeast, borax, soda, salt, and sometimes a dye.[3] The animals which hatched from the eggs over the previous day seem to appear instantly.[3] “Growth Food”, containing yeast and spirulina is then added every few days.[3]

Illustrator Joe Orlando, famed for his work on EC comics and Mad Magazine, created the iconic sea-monkey image, arguably responsible for their money-making potential. Kids may not be interested in some brine shrimp, but once they saw the fantastic creatures Joe drew, they imagined something very different might burst forth once the various packets were poured into the tiny water tank. While that visual hoodwink led to many stories of disappointment, it certainly sparked big sales numbers. The claims that you could train the sea-monkeys didn’t hurt either!

That is not to say that sea-monkeys do not have a rabid fan base. There are numerous web sites (ex: 1, 2, 3, 4) and books dedicated to the love of the tiny creatures. Most of these discuss the creatures with a humorous slant. While we did buy a set of sea-monkeys to play with, I had trouble finding an original sea-monkeys booklet, but according to the book Buzzwords, various available guides include a tutorial for teaching sea-monkeys to play baseball and guidelines for sea-monkey naming:


I’d love to get my hands on scans of these out-of-print guides if anyone has them available!

In addition, sea-monkeys have been frequently referenced in the context of popular culture, including this episode of South Park, satires by The Onion, Weekly World News stories, and songs by The Pixies and Liz Phair’s “Gunshy”. My favorite site for all the latest sea-monkey references is Sea Monkey Geek, which has recently posted about sea-monkey wallets, sea-monkey cocktails, and awesome sea-monkey artwork.

Joe Orlando’s artwork was used as the inspiration for a short-lived TV series about the creatures in 1992.

Regarding the training claims, you might be able to apophenically will out some choreography if you watch these sea-monkeys dancing to Chopin.

Unfortunately, I couldn’t find any videos of sea-monkeys playing baseball…thought some are bred for racing.

You better run!
Monkeys swimming all around
Monkeys wearing tiny crowns
Building up their castle too