Darling Pet Munkee was originally a one-off (go here for the story of how it happened) recording project combination of Cathy Capozzi of Axemunkee and Sophia Cacciola and Michael J. Epstein of Do Not Forsake Me Oh My Darling. We had so much fun that we decided to do another casual writing session. We set aside a weekend months in advance and spent all of Saturday writing new songs – 6 that day (and the one prior) – and then spent Sunday recording them. The result is a forthcoming collection of 7 songs about items sold in the back of comic books of yore. We’ll be releasing one every month or so for free until we ultimately release the entire collection in early 2012.

Here’s the first track, “X-Ray Specs,” for your enjoyment! We also hear rumors that our rerecording of the original DPM demo, “Darling Pet Monkey,” might be available on the August Boston Band Crush sampler.

I am having trouble finding the exact date that X-Ray Specs were first marketed, but they were “invented” by Harold von Braunhut (who also created the breed of animal marketed as Sea-Monkeys and several other novelty items – wait until next month for the associated music) some time around 1950 and were based on an optical illusion patented in 1909 by Fred Wiedenbeck. An improvement patent was granted in 1971 specifically for X-Ray Spec technology. The glasses were marketed via comic books to young boys curious both about the possibility of seeing their own skeletons and seeing through the clothing of women (TSA agents in training?). Beyond just Harold von Braunhut’s hucksterism with these implied voyeuristic treasures, there is substantial evidence that although he was born Jewish, von Braunhut, who died at age 77 in 2003, became very active within the Aryan Nation (see: The Sea Monkeys and the White Supremacist or The Shocking True Tale of the Mad Genius Who Invented Sea-Monkeys or Contrasts of a Private Persona; Md. Backer of Neo-Nazis Has Jewish Background, Sources Say).  The Jewish owners of the companies that marketed his products dealt with this situation uncomfortably at best, in one case releasing the division because of where profits were being directed.

Since von Braunhut’s passing, we might be able to rest easy that the purchase of a pair of X-Ray Specs doesn’t support hate rhetoric, hate education, violence, and bigotry, but we are probably kept up at night by the fact that “true” X-Ray Specs are a thing of the present with cameras that can see through clothing and of course, our friends in the air-travel business taking a peek at our privates. If only we could purchase those technologies for a dollar from the back of the latest issue of Spiderman.

So, back to the nostalgic and less serious, here are a bunch of ads hinting at some great power provided by the glasses…making them pretty much guaranteed to end up as a disappointment when the real product arrives. The last one is a current X-Ray Specs phone application that allows you to see through clothes (not really of course). This gives a sense of how powerful and ubiquitous the product is, even today. (If, for some insane reason, you want to buy some of these, they appear to be sold all over.)

So, how do X-Ray Specs actually work?

“X-Ray Specs consist of an outsized pair of glasses with plastic frames and white cardboard “lenses” printed with concentric red circles, and emblazoned with the legend “X-RAY VISION.” The lenses consist of two layers of cardboard with a small hole about 6 mm (.25 inch) in diameter punched through both layers. The user views objects through the holes. A feather is embedded between the layers of each lens. The vanes of the feathers are so close together that light is diffracted, causing the user to receive two slightly offset images. For instance, one would see two offset images of the pencil. Where the images overlap, a darker image is obtained, supposedly giving the illusion that one is seeing the graphite embedded within the body of the pencil. As may be imagined, the illusion is not particularly sustainable.”

Here’s an example of what you might see if you looked at your hand through X-Ray Specs. 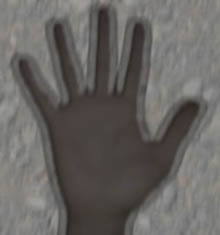 I’d also be remiss not to mention the great band X-Ray Spex, named after the item naturally. Singer Poly Styrene sadly passed away in April 2011.

Leave some comments and tell us about your experiences with X-Ray Specs!

I don’t wanna be with you, not knowing what you mean.
I don’t wanna sleep with you ’til I can see into your dreams.

…with my X-Ray Specs!