We’re super excited to have a mix of custom and existing art that we have had the opportunity to include in TEN. I can’t even begin to express how lucky we are to have had this amazing group of artists get involved in TEN.

Here’s a quick peek at some of that art and a little info about each of those artists! (I will spare you the “storyboards” I “drew” for my own reference.)

WALTER SICKERT
First, our official poster was designed by Walter Sickert. (We’ve collaborated with Walter before as well!)

(The story of Walter’s conception of the poster.)

Walter was born on the sea and has dedicated his life to, and makes his living from, music and visual art.

Walter’s art is showcased in museums and private collections world-wide and he routinely collaborates with authors, other visuals artists and musicians.

Walter is the founder and impresario of the SteamCRUNK band Walter Sickert & the ARmy of BRoken TOys who have been described as “Musically sophisticated and immensely talented, wildly unusual and diverse in material and presentation, a Dada-esque circus carnival run amuck, and just plain good ‘not-always-so-clean’ fun.”

Walter Sickert recently produced 28 Seeds for the stage (with companion graphic novel and soundtrack), which he originally created as a radio play for the RPM Challenge. He was voted Boston’s best artist by the Boston Phoenix readers’ poll in both 2011 and 2012 and has illustrated several children’s books. Follow the “Pied Piper of SteamCRUNK” & download his music: @WalterSickert & armyoftoys.com

We were extremely grateful to get Kristilyn to design our official “Greetings from Spektor Island” postcard, which was sent to all of our Kickstarter backers and many other fine folks.

Kristilyn (We’ve collaborated with Kristilyn before as well!) is an illustrator, crafty crafter and occasional animator whose work can be found in galleries along the East Coast. When she isn’t conjuring up her next adorably macabre image, she can be found around New England at a convention or craft show or in a Boston club drawing the most talented local bands as they perform.

portfolio site: www.kristilynink.com
blog: www.kristilyn.com
store: www.zombie-romance.com
twitter: @zombieromance
facebook:
We also had the wonderful honor of another piece by Kristilyn, Piggie Antoinette, which appeared in the film.
Dug McCormack

Dug (We’ve collaborated with Dug before as well!) We met Dug originally when the children’s band that Sophia and I play in, Space Balloons, was on the pilot episode of Rob Potylo‘s TV show, Worried All the Time. Dug did all of the artwork for the show, and he also had a showing of additional work at the Worried premiere. We were very excited that he agreed to make these pieces of bookmark art for us to appear in the film. 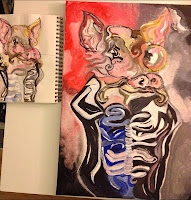 jojo (art), a collaborator in many of our strange adventures, made us a wonderful cat in a Prisoner outfit commission a while back and we thought, perhaps it would be great to use a Pig in a Prisoner outfit for our Scooby-Doo-style, eyeball-looking-through-a-painting shot.

She made us this rad pig and we decided we liked it and didn’t want to cut it up and ruin it. Instead, Sophia made a quick simple pig to mutilate (see below).

We didn’t commission this actively, but only because we were fools! We love it so much that we not only put it in the movie, but we’re looking at it as a possible cover for the novelization of the film. 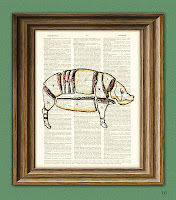 We came across CollageOrama on etsy while looking for props and art for TEN and immediately fell in love with their hand-designed dictionary page art prints.

We specifically loved this pig print for TEN, but they’ve got everything from Abraham Lincoln riding a dinosaur to mustachioed dandy cats. Check out their shop!


Molly Devon
Molly was not only one of stars of TEN, but she also made one of the two lighters we used in the film. They play a special role, so it was wonderful to get a nice custom piece to feature! 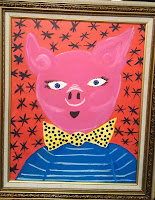 When we loved jojo’s painting too much to mutilate it, Sophia (producer, star) painted this lovely bowtied piggy to serve as our peeper painting. See some video below showing how we managed the peeping effect.

While we did cut the eyes out of the painting, I am happy to report that we saved them, and did a little restoration and now have this painting in a relatively intact form in our collection.