The Michael J. Epstein Memorial Library has collaborated with five amazing visual artists to write five new songs based on their works while they created five new works based on our songs. Visit our project summary page for more information. Each day this week, we will release a video showing our creative process in writing the song inspired by each work, leading up to a showing of the works and live performance of the songs at:

Out of the Blue Gallery on September 14th.
106 Prospect Street, Cambridge MA
Facebook Event
http://www.facebook.com/outofthebluegallery
We will be giving out 50 CDs of the songs associated with this project out for free at this show.

Our first artist collaborator is Walter Sickert. Walter is one of our favorite artists and songwriters. We’ve had the honor of playing with him and the ARmy of BRoken TOys on several occasions. We’ve even mangled one of their songs a couple of times! We were extremely excited that he agreed to work with us on this project!

Walter provided us with “Saint of Glass Worms” to inspire our song. We wrote a three-movement song about an Earthbound Mars-worshiping cult, praying to escape impending doom as the Pale Horse asteroid comes hurtling toward them. For those of you in the know, Pale Horse was a plot point in Sickert and the Army’s (with Liars and Believers) amazing 28 Seeds Apocalyptic Sci-Fi Steampunk Musical. We thought it would be fun and interesting to set this piece in same universe as that work, even if the stories don’t really overlap otherwise.

Here’s a video telling the story of how we created the song.

Take the red pill I provide.
Embark with me, across the sky,
as time and space shed their disguise.
Blue burns away, as you close your eyes.

We’re coming from the lost time.
We’re nothing but the sum.
From the tiny piles of pieces,
we are the chosen ones.

We come from light to darkness.
We’re running from the sun,
to the Saint, the Saint of Glass Worms
For he’s Ares’ only son

We were particularly lucky to get a bunch of inter-library loan singers to help us out with the final Martian-cult chorus. Special thanks to: Johnny Blazes, Catherine Capozzi, Deborah Haber, Linnea Herzog, Jesse Nicole, Ria, Jen Rosen!!!

For the other half of this project, we were totally delighted to have Walter choose “The Violinist.” We’ll let this wonderful video of his magical creative process tell the story!

Reference piece made from squid-ink and unicorn-blood-water-color on paper, ripped and collaged over archival prints of itself and then photographed with a Rolleiflex 2.8 FX Medium Format Twin Lens Reflex Camera; printed on Canson Infinity High Gloss Premium Resin coated Archival paper. Scanned to create a locus and then burned. 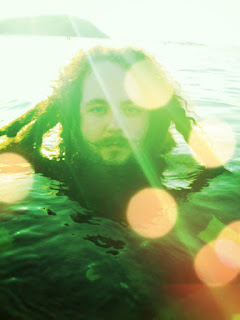 Walter Sickert was born on the sea and has dedicated his life to, and makes his living from, music and visual art.

Walter’s art is showcased in museums and private collections world-wide and he routinely collaborates with authors, other visuals artists and musicians.

Walter is the founder and impresario of the SteamCRUNK band Walter Sickert & the ARmy of BRoken TOys who have been described as “Musically sophisticated and immensely talented, wildly unusual and diverse in material and presentation, a Dada-esque circus carnival run amuck, and just plain good ‘not-always-so-clean’ fun.”

Walter Sickert recently produced 28 Seeds for the stage (with companion graphic novel and soundtrack), which he originally created as a radio play for the RPM Challenge. He was voted Boston’s best artist by the Boston Phoenix readers’ poll in both 2011 and 2012 and has illustrated several children’s books. Follow the “Pied Piper of SteamCRUNK” & download his music: @WalterSickert & armyoftoys.com