December ’11 update: We were very honored to have TIME Magazine Online select our video as No. 6 (we see what you did there) in its Top Ten Creative Videos of 2011 List – TIME LINK 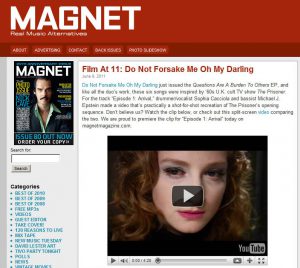 July 11 update: Our music video debuted just about a month & a half ago on Magnet Magazine  (link to blog post about the video and making of info). Of course by now you know that the video is a shot-for-shot remake of the opening sequence to ’60s cult British TV show, The Prisoner. The two links to the video (the original version and the comparison video – which has The Prisoner in a box in the lower corner) have combined views of over 100,000!

The following is a list of some of the exciting features the video has received!

We just got word that MTV Latin America has the video in rotation for June and July, and MTV UK has also played it!

here are some of the exciting places it has been featured online:

The Daily Wh.at – music video of the day 7/12/11 “named after the show’s thirteenth episode — only play songs inspired by Patrick McGoohan’s criminally short-lived cult TV show. Hope to be seeing much more of them in the future.(ucwidt)”

Comics Beat – Friday Fun, 7/8/11 “Could the Boston-based musical duo Do Not Forsake Me Oh My Darling be any bigger Prisoner fans?”

Topless Robot – Prisoner-themed  band makes Prisoner-themed video for Prisoner-themed song -“this is impressive enough, but the fact that the band shot their video in Boston and New England — and not the actual England — yet managed to recreate shots so accurately, but also somehow got their hands on a vintage Lotus 7 car complete with the correct license plate… well, it’s beyond amazing. That’s lead singer/drummer Sophia Cacciola as Number 6/Patrick McGoohan, by the way. Somewhere in the pantheon of Impressive Acts of Nerdery, this thing ranks near the top.”

Screened – “there’s homage and there’s outright obsession…..Apparently this took two years of planning to pull off, but hell…it shows.”

The Boston Phoenix “this clip for “Episode 1: Arrival,” directed by Theodore Cormey of Lost Jockey Productions, it’s just next-level insanity, replicating, scene-by-scene and shot-by-shot, the show’s opening sequence, filmed at various locations around Massachusetts over 11 days of shooting and two years of planning. It’s nothing short of jaw-dropping, and really, suddenly getting chased out of nowhere on the beach by a giant fucking orb is a metaphor we all can relate to.”

The Weekly Dig – “’60s series steeped in espionage The Prisoner acts as the inspiration for their music and wardrobe, so it should be no surprise that their latest video is a stunning–and nearly identical–Prisoner homage.”

Ronster’s Reviews “painstakingly accurate recreation, right down to the Caterham 7 ‘Prisoner’ edition car (a replica of McGoohan’s car, which was produced in 1990 in limited quantities) and the near-perfect replica of the interior of The Prisoner’s flat. If like me, you are a fan of this series, you will be amazed at how close they got it. They substituted a Boston garden for the Welsh village of Portmeirion, but found a beach location which is uncannily similar to that in the location in Wales.”

The Daily Pop – “Filmed throughout Massachusetts , the video is an astounding achievement. Painstakingly accurate to the source material, the video isn’t just a shot-for-shot homage to the classic ITV program, but the song itself is really great. Featuring a replica of the signature Lotus 7, every camera angle is replicated along with McGoohan’s unique facial expressions (performed by lead singer Sophia Cacciola). As a fan of the original Prisoner I was very impressed by the attention to detail, then taken in by the song as well.”

Trusty Plinko Stick – “I love how music steeped in nerd culture has evolved past the convention circuit and Dr. Demento (not that there’s anything wrong with either) and into the realm of elaborate artistic endeavor – but these two kicked it up a dozen or so notches more with the video for their song “Arrival.” And yeah, the song itself is pretty rad, too. I definitely need to hear more from these people.”

And on Prisoner-specific fan sites:

Six of One featured the video on the front page.

Johnny Prisoner “I found it awesome, and brilliantly filmed, and executed. I was pleased not to see Portmeirion in the music video, filmed as it was in Boston, and around New England. All the detail that Sophia, her band, Do Not Forsake Me Oh My Darling had put into the video, it’s quite astounding really. And to achieve a shot by shot replica opening sequence to the Prisoner, is quite marvellous to see.”