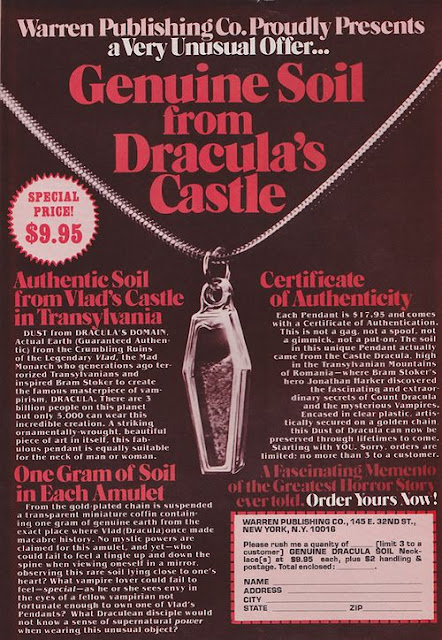 It’s time yet again for an examination of the item behind the Darling Pet Munkee song! We’re working on a video for this song right now! See post 1 and post 2 about that!

It’s hard to even begin to decide where this story starts and where it should end. The loose, but specific similarities in Bram Stoker’s 1897 novel Dracula between the titular character and Vlad III Dracul (AKA Vlad the Impaler) (and less so to the Blood Countess Elizabth Bathory) became popular in the 1970s with the publication of In Search of Dracula, a book connecting Vlad with Stoker’s character. Although they were hardly the first to propose this connection, they were perhaps the most explicit and thorough up to that point.

Apparently, someone was inspired around this time to create a collectible memento – a necklace full of soil from a castle on the edge of Transylvania (in Romania) allegedly tied to Vlad’s reign.

Why soil? One of Dracula’s legendary traits is that he can only rest in the presence of soil from his homeland. Presumably, the ownership of this item would allow you to feel as though you, like Dracula, can be at peace when traveling.

I was lucky enough to acquire a genuine 1970s amulet on eBay recently!!! Although it has an extremely cheap gold-colored chain and is essentially a plastic coffin amulet full of some dust, I thought it was kind of great. I got number 1697 out of 5000!!!

Our musical tribute to this fine item:

I offer you this amulet

I offer it from around my neck

I offer you this sacrifice

For those who have paid the ultimate price

I offer you this amulet

That Vlad himself would use to rest

The blood and soil of Transylvanian rite

For those who have paid the ultimate price

https://www.youtube.com/watch?v=NhAEnUYjIzU Back in 2012, musician-couple Michael J. Epstein and Sophia Cacciola started a fun side project called Darling Pet Munkee that just wrote garage rock songs about weird novelty advertisements a la Sea Monkeys. And one of my favorite tunes they cranked out was this one, about “Genuine Soil From Dracula’s Castle.”