The complete combined story has been presented in a single post here. 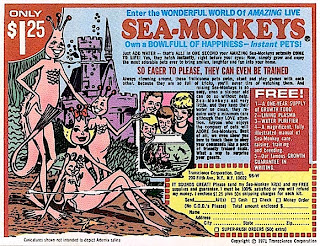 We return to the saga of buying The Michael J. Epstein Memorial Library‘s Volume One on vinyl…only problem is…it’s not released on vinyl.

we appreciate your generosity and your offer to send your sea monkeys!

Nevertheless, we don’t want them to undertake the long journey to
Austria in a dark vessel, as this would surely be inconvenient for them.

We received this record from CD-Baby. I don’t know who produced this
record, but we are sure that all remaining copies are in similar condition.

Unfortunately we cannot take the responsibility for the production of
this record. Maybe you can contact CD-Baby directly to get a replacement?

Thank you for your kind reply. The sea-monkeys were relieved to hear about your response. Marvin told me that he would be lonely if I had sent the rest of his family overseas. We celebrated with extra algae that evening. Unfortunately, his relief was short-lived. I did contact the company CD-Baby as you suggested to make a similar sea-monkey offer. I was worried that I would be communicating with toddlers when I first called them, but I was greatly relieved to find an adult on the other end of the phone. Well, I couldn’t verify their age as they would not give me any personal information, even when I asked nicely. Still, the voice was at least a teenager or perhaps a pre-teen who had gone through puberty. I suppose it might have been a child talking through a voice disguiser that made him sound older. Regardless of their age, they seemed very reliable. They told me that they would gladly accept the sea-monkey family, even without Marvin, in exchange for the item’s return. After a farewell party with monkeycake and plankton punch, the sea-monkeys were off on a trip to the west coast. They sent a few postcards on the way and seemed to enjoy the journey. After they arrived, upon investigation, the adult baby informed me that the the item was indeed very defective vinyl and that it was in a format not appropriate for play on turntables at all. They told me I might not have this special kind of player (a seedy player) that handles these special records called seeds. They suggested that I speak with you. They did offer to relay the sea-monkeys to you in exchange for resolving this issue, but they asked if it would be possible to keep Marvin’s first cousin Gertrude as apparently the staff there has taken quite a liking to her. Marvin is actually quite sad and misses Gertrude a lot – he was terribly fond of her. I am thinking that perhaps I should just reunite them all. It was probably a mistake to separate them. I know I would not want to ship my sisters off to a far-away place. That is actually not completely true. I would like to ship one of my sisters off, but the other seven, I would greatly prefer for them to stay in our cottage. Would you like for me to have them send the whole family (without Gertrude of course) and to have Marvin travel to meet you as well?

Thinking of you,
Michael J. Epstein