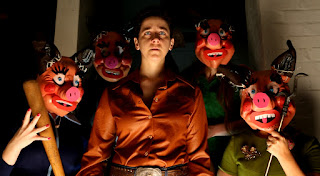 Day 3
We began the third day of principal photography doing something that felt a little strange. We had rented the Beach Mansion for its lavish rooms and fancy decor, and on Day 3, we decided to spend a whole lot of the day in the dingy basement.

Much of TEN actually takes place in these dingy spaces and we would return to the basement on several other days to shoot other scenes.

We got to take advantage of the old, unused boilers and other hardware in the basement for some nice creepy shots. 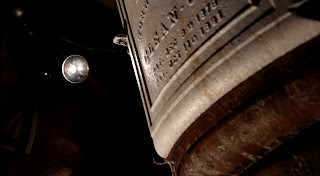 One of the most difficult things about making a movie on a budget is that the script is written and the boards are created with a very specific setting, frame, and performance in mind. It’s often impossible to achieve exactly what was originally intended. Sometimes, this works out for the best and the result is far superior to what was envisioned. That happened the majority of the time shooting TEN. The contributions of everyone else helped expand my ideas into much bigger, better ones. In particular, Kelly Davidson Savage was great for helping create frames that exceeded the original concepts.

However, there were a very few instances where things felt like they went comically wrong. One segment of the basement shoot was the standout “disaster” of the whole shoot. When we made the original concept trailer for the Brattle Theatre Trailer Smackdown, we just bought and used existing pig masks. For the feature film, we decided it would be way better to create our own masks. One of the things that really bothered me about the pre-fab masks was the eye openings. You could see the eyes of the person inside (or more often than not, it was misaligned and you’d see their eyebrow or forehead or something). For the film, I wanted the masks to have an extremely cartoonish feel to contrast with the terrible things happening. I find that disconnect to be the most disturbing. As such, I wanted the eyes to be part of the mask, and I wanted every element of the real face to be obscured. As, perhaps a shock to all of you, I am not a mask designer, when Sophia and I worked to design the masks, we did not come up with any method for the person wearing the mask to be able to see.

The script doesn’t call for too many moments during which vision inside the mask would be necessary, so we went with it. Well, on Day 3, we needed to shoot people walking around a room in the masks and beating someone to death with the masks on (without actually hitting them of course). This proved to be a terrible plan. (No one was hurt during the beating at least! There was only one very close moment with a metal pipe.)

When the scene came for the pigs to file in and look imposing (as taken from my favorite moment – #9 – in the original trailer), things went pretty badly. I tried to use precise terms to describe actions – rotate left, tilt your head right, etc. No one understood anything I was saying. We tried repeatedly, but I am not sure we ever got a smooth take of it before I gave up in frustration. At one point, after I kept telling Sophia to move toward the center and she kept moving away from the center, she removed her mask for a moment and said, “Oh, I had no idea where I was in the room.”  Next time, we make eyeholes and go over terminology for blocking and movement! We’ll see if I can make it all work in editing. I probably can.

We grabbed a quick flashback shot (there are many short flashback shots, which I can’t say more about without ruining the movie a bit) to break the moment before going into the most dangerous stunt scene in the movie perhaps. It was a series of scenes during which Molly Carlisle needed to be suspended upside down while wearing a mask in which she couldn’t see anything. Molly did an amazing job repeatedly flipping up and over and supporting herself for each shot before we could give her a break. We had multiple people standing by ready to stop her from falling. We couldn’t pad below her in most of the scenes because the floor was visible, so we relied on everyone to be fully alert and attentive, ready to move in and take care of any issues. I was really impressed with Molly’s agility and performance under those stressful conditions and once again, the first rule of the production – no one gets hurt – was upheld. 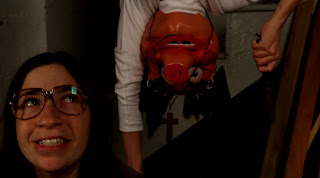 After the complex hanging shots were done, we moved on to the first of a series of shots in the film inspired by the first-person shots in Spellbound (like this milk drinking one at 1:14 – pardon the music on this video) and the keyhole scene in And Then There Were None (below) [we replicate this scene on Day 4].