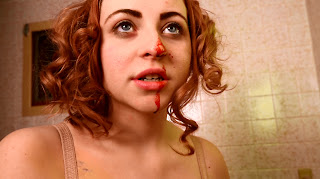 Day 10 was our most closed day of shooting. Kelly, Cathy, and I were the only carryover from the crew and Rachel also helped with the shoot. She was not in any of the scenes. The set was cleared of everyone else who was not in the scenes. The scenes scheduled involved the recreation of scene 3 from the original concept trailer and a bloody topless death scene. 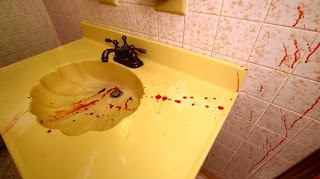 Interestingly, the topless death scene was always the one scene that seemed gratuitous, and it was written as intentionally so. In the end, we dropped the toplessness and a significant portion of the bloodiness of it. I think that was the right decision. It was originally intended to be a sort of satire of horror scenes in which characters are inexplicably more and more covered in blood as a sequence goes on. Instead, I think it became a far tamer, less campy, but perhaps more subtly and realistically disturbing moment. 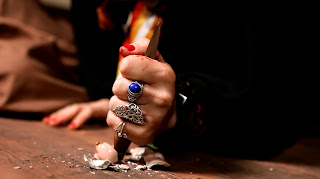 The final scene that we shot, the recreation of the scene from the trailer was originally intended to be a fully clothed (or maybe underwear) scene. Karin suggested that it would be stronger if she were unclothed so that she could interact with the religious fanatic in a way that created a certain power dynamic. In order to make that work, the other two in the scene agreed to do it without clothing as well. I was sold on the interactions and the creepiness of bloody naked bodies, but was never quite solid on how we’d get exactly the shots we needed to make it work. It’s quite a complex space to work in and the brightness of skin and the way it sticks out differs a lot from clothing in these shots in dark spaces. Our attic doesn’t have much in the way of heat. So, we tried to heat the room using space heater, but it remained pretty cold. We tried our best to hurry through the scene as the poor unclothed folks froze. We didn’t really have enough easy access power to run lights and heaters at the same time either. In fact, we flipped a breaker at one point when someone tried to turn on something downstairs while we shot in the attic. Earlier in the night, we had an outlet that shorted out down in the kitchen. I had to quickly cut the outlet out of the wall so that the breaker could be flipped and the refrigerator could have power restored. We still don’t have power on our stove or oven!

Anyway, as I specified in the early days of this blog, I am a big fan of patient, long shots. The shots I had planned were quickly deemed impossible and we rushed to get something that would work to replace the original idea. I am not sure we have anything longer than a few seconds at a time that don’t show someone shaking. So, this one is a real mystery to me. I am going to have to dig in hard during editing and see if I can create something wonderful out of the unplanned.

I feel a little bit bad to put everyone through such a difficult shoot and be less than sure about what we were getting, but I suppose that is something that happens from time to time. After going through so many days in a row of 2-4 hours of sleep, it was hard to think fast to make the necessary adjustments and hard to process how to make the best of it all at the time, but I am sure we managed something that will work, even if it means much faster cutting and much less suspenseful patience than much of the rest of the film will show. Perhaps that will be for the best and the tonal variety will make the faster movement more powerful than if it has been happening throughout. We shall see in the final product.

After this shoot wrapped at around 7 AM, I slept for about a week straight, having dreams of pigs and of directing people, confused half  the time about whether I was awake or asleep, and depressed that we weren’t still doing this insane thing every day. We missed waking up to 15 other insane artists running around making magic happen.

I have never in my life had such a remarkable experience working with a large group of people to bring something like this into the world. Everyone involved was nothing short of amazing. The cast and crew went well above and beyond what I had expected and I think ultimately, the love and care that each person put in to their roles in this production will show.

I can’t wait to share this thing with the world!