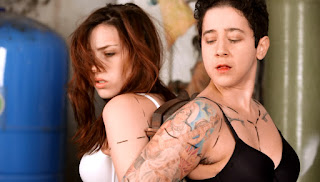 As we progress further and further into the shoot, it actually becomes more and more complex to talk about what we did each day without revealing more and more of the plot.  As such, keep in mind that there will be spoilers here even if I do my best not to reveal too much. Day 8 brought us back into the basement for half the day for a big tied-up interrogation scene. In fact, the scene was so intense and so difficult, that we had to split it across two days. 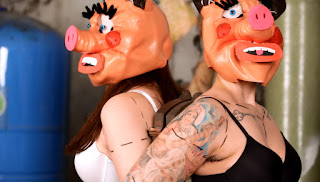 After having their hands tied behind their backs for 4 or 5 hours, Jade and Molly were reaching the point of such bad pain that we had to let them free for their safety. We had to work them up to the next stage during which they’d be tied up and set on fire (not really so much on fire, but a little bit maybe). 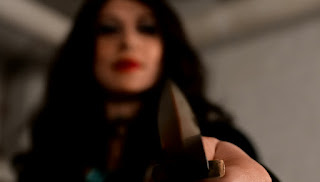 After some scary basement adventures, where breathing is pretty much torture, we returned upstairs, picked up a few short scenes in the kitchen, the model’s bedroom, a brief flashback or two, and moved on to another major scene, a scene in the pool room.

Now, the immediate insanity of such a scene is that maintaining continuity of table play while characters are conversing and playing pool is virtually impossible. Maybe just plain impossible. It would be an entire day (or multi-day project) to make this scene work with full continuity, etc. The immediate decision was to not worry about continuity of the pool balls in the scene. 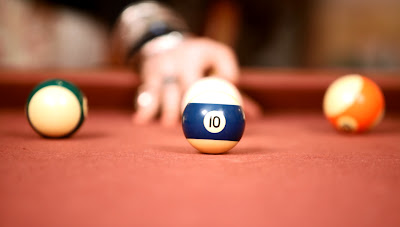 The original idea was to move the camera quite a lot around the room and shoot from both sides and different angles, but the existence of a gigantic mirror in the room, our extremely tight shooting schedule, and a desire to keep the viewer very participant-centric (as mentioned on Day 2) made that undesirable and thus made this a relatively easy scene to shoot, but will make it an extremely hard scene to edit. At first, I had planned to resort to a lot of insert shots of balls bouncing around and going into pockets to hide same-perspective cuts, but I realized how much I would hate that as a product of this shoot ultimately. I think the close-ups will feel different enough to make it work for the viewer. 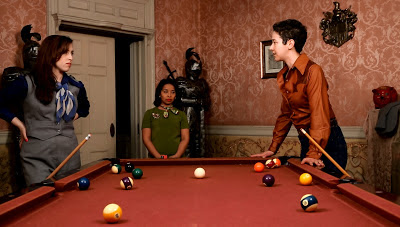 Ultimately, throwing in inserts of balls feels like a lazy, obvious technique. I’d almost prefer that the cuts remain a little uncomfortable over using b-roll junk action to cover that lack of perspective angle change. Believe it or not, these are some of the most difficult types of shooting decisions to make in advance. As we have no chance to redo anything, I can’t change my mind on this one. I think it will be what I prefer. Undoubtedly, some others might have preferred more “junk” inserts. 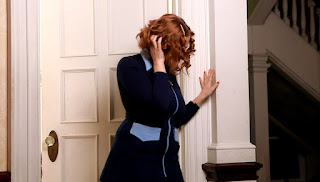 To end the day, we shot a few more short shots including several characters walking in and out of the bathroom (to go with the bathroom shots on Day 2). If you don’t think about film-making too much, you may not realize that sometimes these exteriors (like the bathroom exterior here) don’t match the interior rooms at all. In fact, the bathroom shoot on Day 2 utilized characters entering from what appeared to be a door to the hallway, but was actually a bathroom closet. So, we had to find a door that moved in a way that matched the movement of that closet door. 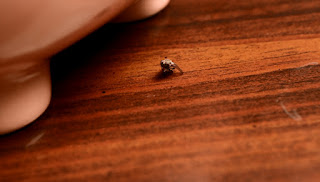 We also shot a closeup of Dalya crying after the events shot on Day 2, an insert shot of a squished fly falling onto a table.

Molly Carlisle is not only great at telling you which animals you may eat, but also when put to the task of finding a dead fly, she does not return empty handed (i.e., we did not kill the fly for the movie)!

We also grabbed a couple of very brief scenes with single characters in them. In this particular one, Sophia is wearing my grandfather’s Sag Harbor VFW hat. Stories of my grandfather have been inspirations for other work I’ve done as well, so I thought it would be interesting to include his hat in this scene. The matching jacket was just something we managed to pick up to go with the hat.