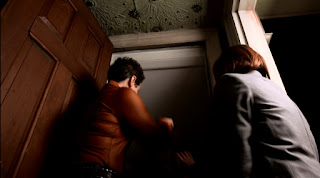 Day 5
We got to start the day throwing Rachel down the stairs. We gave her some knee pads, so it was cool. (I kid. We didn’t give her knee pads.)
We also got to make her uncomfortable by shoving a lit lighter – the “2nd favorite lighter” to be precise, in her face. The “2nd favorite lighter” (a phrase that I think will ultimately pay off when you see the film – I also now call things my 2nd favorite [whatever] regularly.) resulted in what I believe was the first injury on the film set. The first rule of the shoot was “no one gets hurt.” Jade cut her finger open while lighting the 2nd favorite lighter. She declared that she would do one more take and it would be perfect before she addressed the medical issue, and sure enough, what you will see in the final film is Jade opening and lighting the 2nd favorite lighter while bleeding (for anyone concerned, it only required 12 stitches. Okay, I kid, it was a very minor cut.). 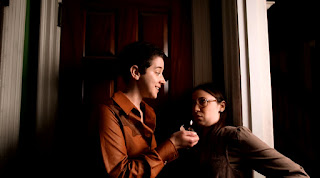 One of the Kickstarter rewards was an opportunity to place an item in the movie. We had a couple of people, Sean Hafferty and Donald Contois, take this opportunity to place a piece of art in the film. Donald actually went so far as to have a photo session done so that his old-timey portrait could appear in the film (which we love!). So, we included both of the contributed pieces as decorations prominently featured in a hallway shot – a fun first-person stroller dolly roll-through shot.
As a B-roll thing, we also MAY have shot the three passing characters looking at Donald’s portrait and slinging a character-appropriate insult. Whether this makes the final film or not is partly up to Donald and party determine by whether it fits in reasonably with the flow of the scene. I am partial to the one included below.

Kelly bravely (insanely?) climbed up some very rickety built-in ladder steps up into a crawl space attic to shoot some overhead shots of characters being watched and just generally wandering by. I was pretty scared that she would fall down trying to climb back out of the space, but she made it out unscathed, and she got some great shots while up there! 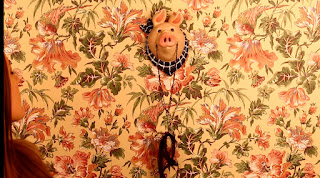 We spent a bunch of time on Day 5 shooting a series of flashback scenes with Kerri Lynch. Poor Kerri had a big mix of flashback and modern scenes. In changing between the two time periods, she had to make big changes to her hair. We, being the mean production people we are, managed to schedule things such that she pretty much had to constantly switch back and forth for shots on the same day from those differing periods. In what I consider the most unsettling, weird moment we shot (something about it skeeves me out), Kerri’s hair gets caught on a piggy hook and a piece of it is ripped off.

I didn’t get a whole lot of time to review footage as we shot. This is probably completely absurd as reshoot opportunities will be scarce (or non-existent) at this point, but I did manage to at least review some of the early stuff and realized that during our Day 2 bathroom scene shoot, the moment when the nose came off the mask so that the doctor could perform CPR looked too much like a mistake. As such, we picked up an insert shot on Day 5 showing the intentional removal of the nose from the mask. We did pick up a few more shots like this along the way and we do plan to do another day of pick-up inserts once the movie is done being assembly cut and examined for moments that need extra insert enhancement or clarification. 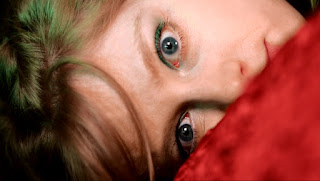 The end of Sunday was when I officially proved that I am crazy to everyone involved with the movie. I said, okay, you know that 700-shot (film stills) shower sequence in Psycho – perhaps the most famous movie killing of all time? I wanted to recreate it. Sure, it has been done a lot of times already (the Psycho remake, the new Hitchcock movie, this one, this one, this one, this one, this satirical ad, this satire, etc.), but I don’t care, I wanted to do it once in my movie-making life. This was it. It was probably the most torturous scene to film. I am pretty sure that everyone who was involved was crying by the end of it because of how difficult the scene was. We shot it in about 3 or 4 hours, but it was not easy.
One of the interesting things about our shower-scene recreation is that it’s not in a shower at all. Huh? It’s true! I thought that was a twist that made it worthwhile. Recreate the famous shower scene, but not in the shower. Originally, the script called for a dialogue between the characters involved, but Sophia (who is killed in the scene) insisted (and correctly so) that we revise the scene to include the toilet flushing (which was actually one of the most controversial moments in Psycho – the first film to show a toilet flushing) and to go right to the killing after (as in the original). I am quite excited to put it together and see how it comes out, but I will say, it will be as challenging to edit as it was to shoot. Hopefully, there will be fewer tears.