We enjoyed being part of the Best of the 48HFP Boston this year and getting a few nominations and an award! We were nominated for Best Music, Best Ensemble Cast, and Best Ending (didn’t get a photo of that screen) and we won the Retro 48 award! 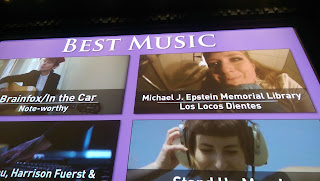 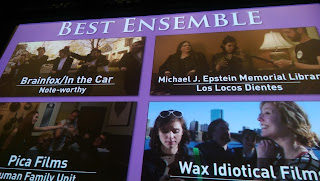 This was year four of https://mjeml.michaeljepstein.com/ participating in the 48 Hour Film Project! The latest addition to our Los Locos trilogy is Los Locos Dientes! You can read our recaps and watch our films from 2012 – Los Locos Manos and 2013 – El Loco Ojo – and 2014 – La Loca Boca!

We got a late start this year since several bandmembers had other engagements on Friday evening so we basically ended up doing the 32-hr film project. Lisa Battiston went to kick-off Friday night to pick up our genre and we ended up with Dark Comedy. The required elements were Shawn Middleton, ice, and the line, “It’s the Future.”

We met up earlyish on Saturday morning with no ideas, no location, and down a few people from previous years (Susannah, notably, was at her bachelorette party; Catherine was unable to participate, and Jane’s husband, John had to stay home with a sick baby – who definitely would have been a vampire baby if she were feeling better!) We came up with a few ideas (pictured) and quickly broke for brunch. Ha.

For whatever reason, Sophia kept mentioning vampires with toothaches and Dan St. Germain (his second year on team https://mjeml.michaeljepstein.com/) offered to call his father to see if we could use his dental practice as our set for the day. This was an amazing development! In all previous years, we had shot at our home, often constructing insane sets out of tinfoil and duct tape, so it was pretty exciting to have a real location that already looked how it needed to look! The only downside was that it was an hour away, but it was so worth it!

We got to the location around 4 PM and shooting moved pretty quickly once we were there. We spent a lot of time on the waiting room scenes, making the experience of accidentally visiting a dentistry for vampires as awkward as possible for our Shawn Middleton (played by Dan.) We also, as has become our way, included all of the previous years’ props/lines/characters. We shot until 11:30 PM and made our way back to Somerville to edit and write songs!

Once we got back, we had to quickly shoot some bedroom scenes with Dan and then ordered 2 AM desperation Dominos pizzas, which we all agreed were marginally better than we expected them to be. Dan set into editing the film (and only lost his entire session once when Premiere crashed) and Michael, Lisa, Rachel, and Sophia set about to write the perfect vampire dentist waiting room AM radio adult contemporary soft-rock song, “Undying Undead Love.” Rachel wrote/performed the main music piano part, while we all collaborated on the ridiculous lyrics.

Rachel and Lisa departed around 4 AM, while Dan stayed until 5:30 AM editing. Michael and Sophia got a quick few hours of sleep and then got up the next day to do the sound design and coloring.

Sound design included some foley work (scraping dental tools together, writing on paper), some use of stock sounds of drilling, and a little ADR (fixing up one of Sophia’s lines, and adding the phone computer voice). By 6 PM, Michael was off to turn in the finished film! 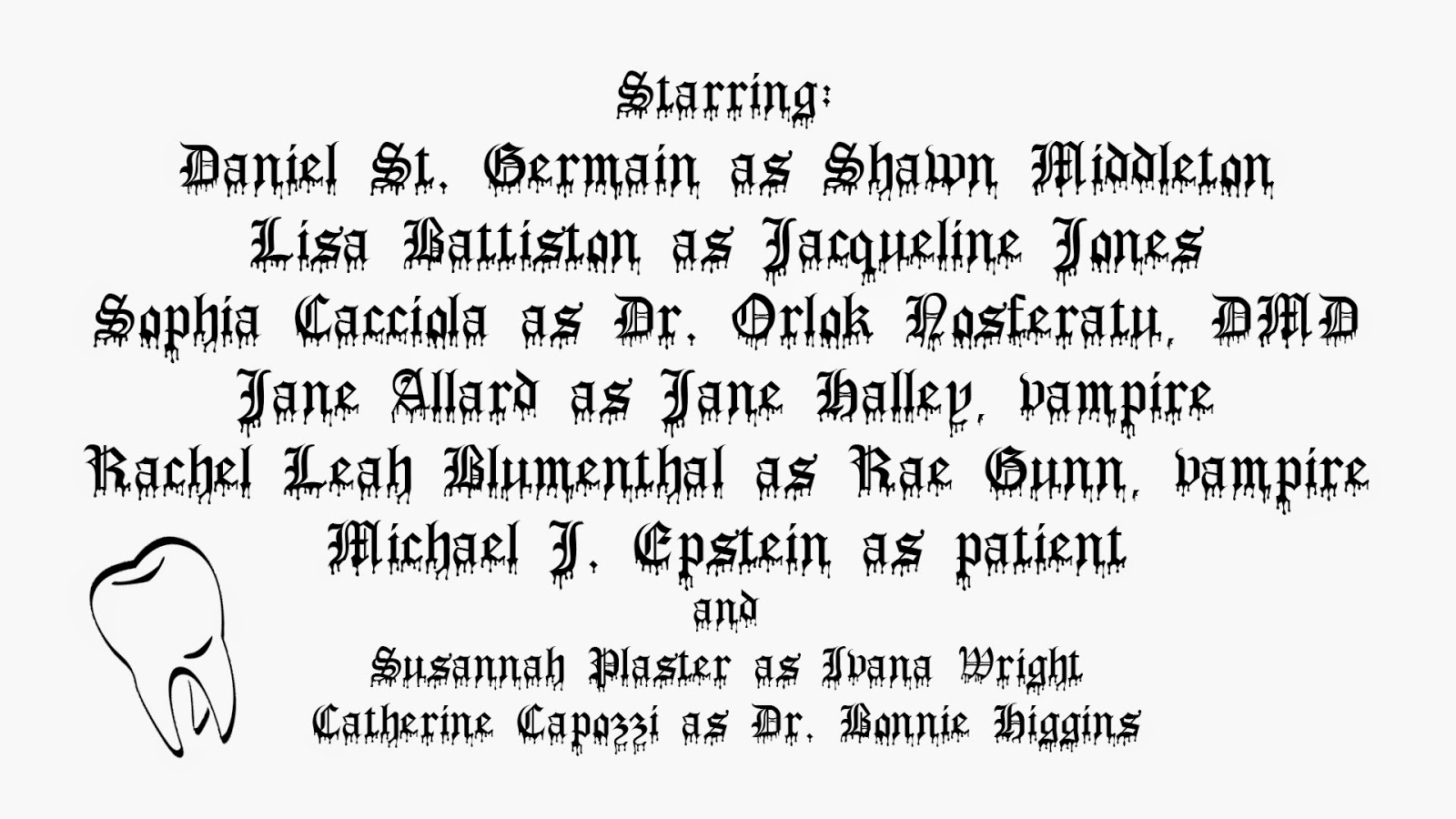 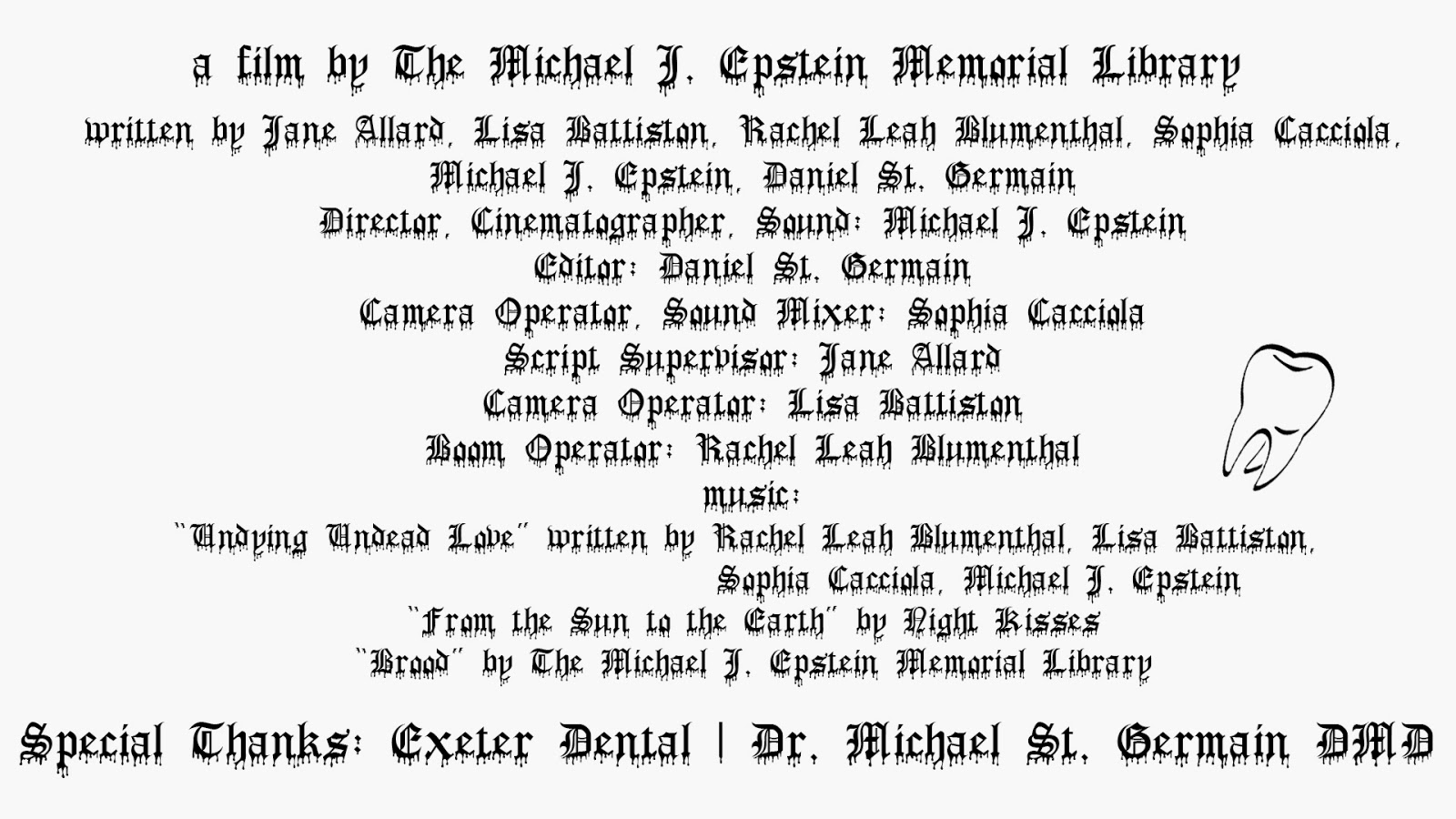 A Playlist of a bunch of the Boston films this year.